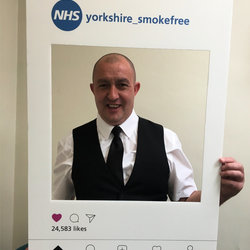 Congratulations to Martin who overcame his addiction to cigars with his hard work and support from the Yorkshire Smokefree team in Barnsley.

Martin attended the hospital office service in February 2019 with a fellow smoker. Heavily addicted to smoking, Martin would smoke between 30 and 40 cigars a day. Concerned about his wheezing, constant coughing and the amount of money smoking was costing him, Martin decided it was time to quit.

Martin had tried the service previously in 2017 where he quit for a few months but unfortunately did not have the motivation to quit for good. Coming back with a determined attitude and a friend also looking to give up, Martin has successfully quit smoking. Having a friend in the same position was a great help for him, the two of them ‘made it a challenge between one another who would give in and smoke first… we also liked the competition of who would blow the lowest reading into the carbon monoxide monitor’.

When Martin first gave up smoking, he found it helpful to change his routines. When he realised that coffee triggered thoughts of smoking, he replaced this for water, a healthier alternative that doesn’t bring on any smoking cravings. He also found that in terms of medication Champix was a huge help, taking the enjoyment out of smoking and making it easier to quit.

The support from hospital advisors was really helpful, as well as the regular support calls and texts from the service that helped him to keep focused and motivated. He states ‘it’s been a treat to attend and I always looked forward to my appointments as they were supportive but also enjoyable. They gave me tips to keep smoke free and it was fun to come with my friend as we kept each other going’.

Although when first quitting he found himself eating more and becoming snappier than usual, he was determined to quit for good this time. Now 12 weeks smoke free, Martin feels healthier in himself, his wheezing has gone, and he doesn’t need to go to the shop as often to waste money on smoking. He’s particularly proud to finally be able to say he’s done it, with his personal motivation and help from Yorkshire Smokefree Martin is now living a healthier lifestyle.

Our online service takes you on a personalised
28 day journey to becoming smoke-free.